James Maxwell is the international best selling author of eleven fantasy and science fiction novels including Enchantress, Golden Age, and A Girl From Nowhere. His books have sold over a million copies and have been translated into French and Italian.

Born in 1980, James was raised until the age of seven in Kerikeri, a town with a population of a few thousand people near the northernmost tip of New Zealand. It was a tranquil place, where children went to school barefoot and he was able to roam unsupervised. He remembers wandering through orchards and pastures and discovering waterfalls hidden within lush forests – with no one for company other than his black Labrador and a few distant sheep.

Economic forces spurred a change, and James’s family relocated to Brisbane, the third largest city in Australia. As always, James kept his head down and read books. He was the ‘boy with the book in his hands’, who developed a passion for fantasy and science fiction classics. He began to write his own stories at the age of nine. At eleven, he was writing lengthy fantasy novelettes, and attended his first writing workshop with published authors.

The week-long young writers’ retreat was transformative. James saw that successful, published authors were ordinary people who were somehow able to create magic with words. The young writers would sit around a tree. They were asked: describe this tree; what kind of tree is it? Initially, the children would say ‘tall’ or ‘green’ or ‘leafy’. The authors persisted, and asked what kind of personality the tree had. What impression did it give? Is it ‘proud’? Is it ‘stern’?  Is it ‘unyielding, mighty, and indomitable?’? Is it ‘angry’? Experiences like this opened James’s eyes to the power of language, the idea of a writer’s toolbox, and techniques such as anthropomorphisation. 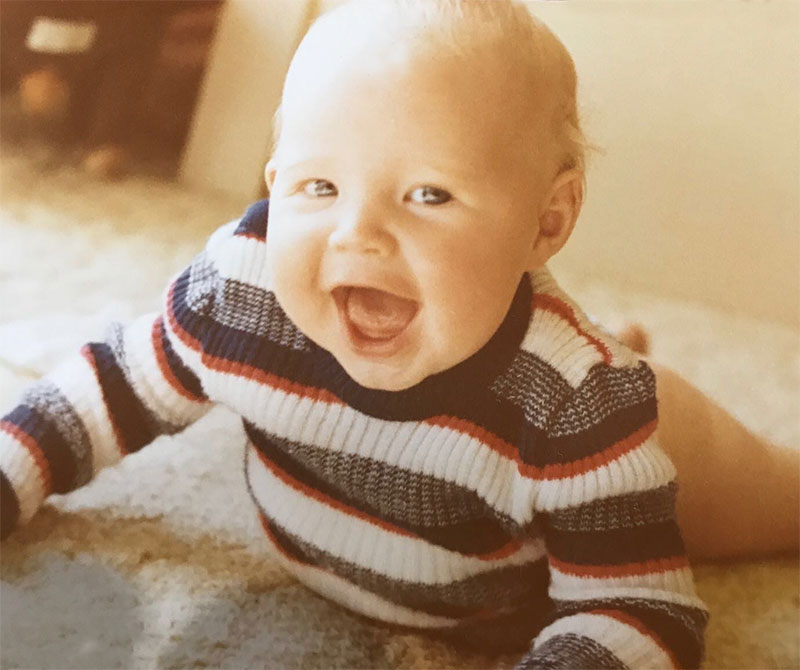 "What lies behind us and what lies before us are as nothing when compared to what lies within us."
- James Maxwell, Enchantress 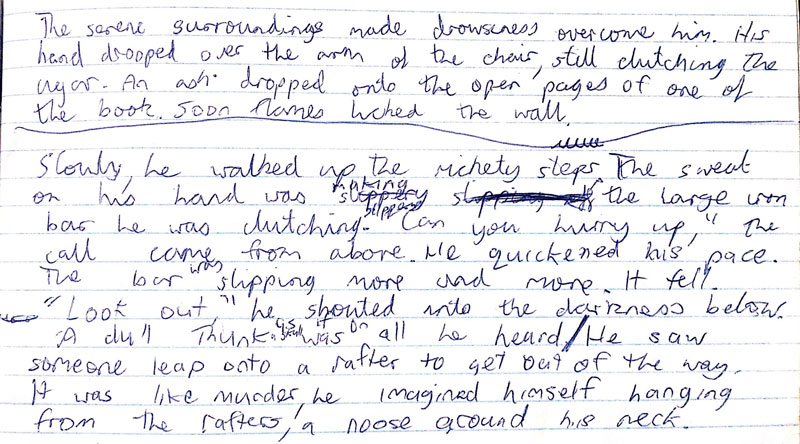 A sample of James’s childhood writing

"How far we travel in life matters far less than those we meet along the way. "​
- James Maxwell, Enchantress

James continued to write throughout his secondary school years and graduated from Brisbane’s Anglican Church Grammar School in 1997. Aside from writing, he became fascinated with computing and software, and finished senior school placed second in Information Technology.

After enrolling to study Information Technology at the University of Queensland, James dropped out of university to work with software in the professional world. Within two years he had founded a software company and at 25 he relocated to London to take on contracts from international corporations. Meanwhile, he continued to jot down notes as he formulated the fantasy epic he would one day write.

"The greatest test of courage is to bear defeat without losing heart."
- James Maxwell, Enchantress 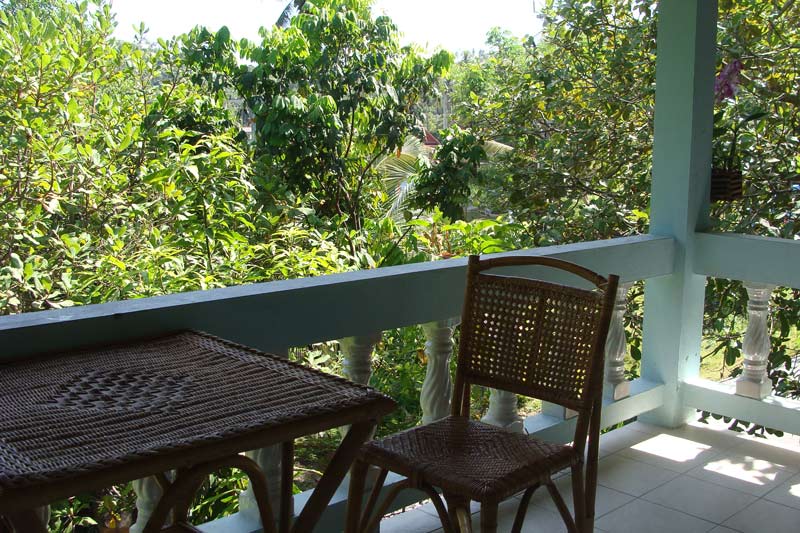 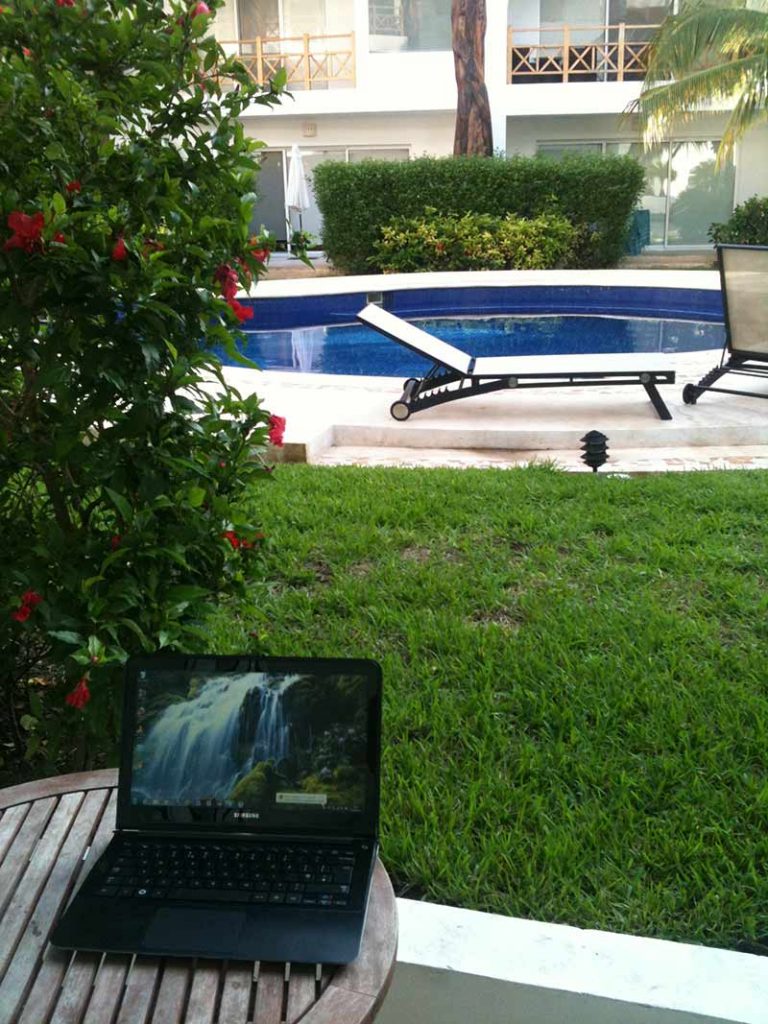 At the age of 29, James had been working in software for a decade but he still hadn’t written his novel. He had the title: Enchantress, and within the pages of his notebooks he had built a detailed world full of magic and intrigue. A deep worker by nature, he wanted the space to devote himself completely to writing. He made a decision and moved to a single-room bungalow in Thailand with no Internet and no television. Six months later he returned to London with a completed first draft.

Back in London, James spent the next two years editing Enchantress, making notes on his Kindle on the daily tube to and from the office and working on the manuscript in the evening. He sought feedback from colleagues and writer’s groups. At last, he decided he was ready to submit Enchantress to London’s literary agents.

Of course, James had no writing credibility to speak of. He had never published anything professionally, and had nothing much to say on his query letters other than that he had a 170,000 word epic fantasy manuscript from a first time author. Of course – nothing happened.

James decided to self-publish Enchantress in May 2012. The book exploded onto the Kindle scene and five star reviews came rolling in. Three months later, James left the software industry, never to return. Well aware that London is both expensive and full of distraction, he rented out his flat in North London and moved to Mexico’s Caribbean Coast, which became another of several writing retreat destinations. He wrote and self-published his second novel, The Hidden Relic, and then moved to the Austrian Alps, where he completed his third novel, The Path of the Storm. A year after releasing Enchantress, he had three chunky fantasy novels dominating the charts.

James was living in the Mediterranean island nation of Malta and working on his fourth novel when the phone rang. James’s books had attracted the attention of an acquiring editor from 47North, the science fiction and fantasy imprint of Amazon Publishing. James signed a four book deal, and in 2014 the four novels of The Evermen Saga were re-edited and re-released.

James moved back to London in 2014, and has since published another four book series, The Shifting Tides.

His third series, The Firewall Trilogy, which uniquely blends fantasy and science fiction, was released over 2020 and 2021.

James now divides his time between London and Australia’s Sunshine Coast, where he lives with his wife and daughter.

James Maxwell is represented by Robert Kirby at United Agents. 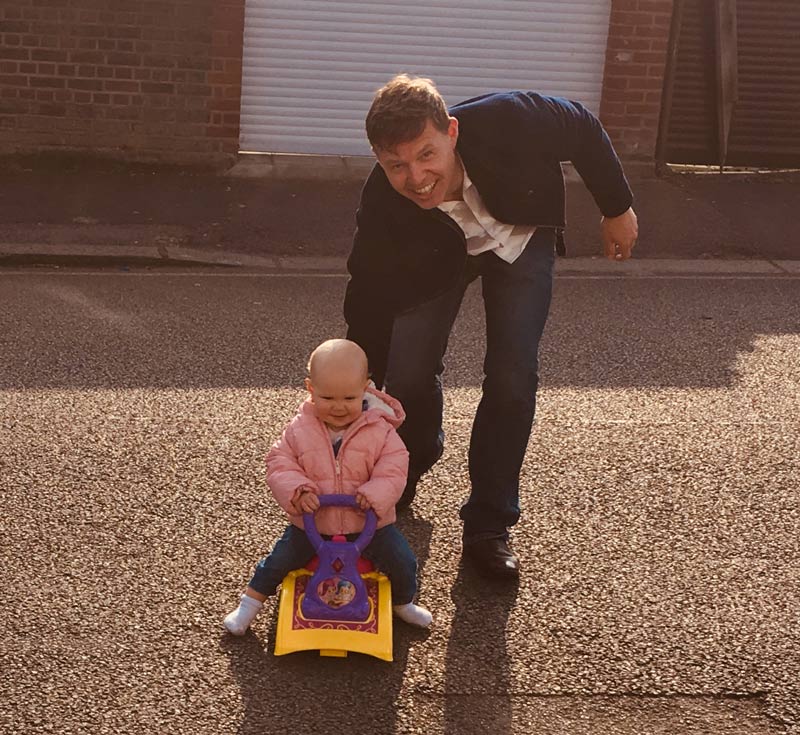 James and his daughter Evelyn